Deaths soar in country that didn’t lock down. Officials identify big reason why

Lebanese protesters held a funeral for their currency

(CNN)Brazil’s coronavirus cases have spiked to 135,106 including 9,146 deaths, according to numbers released Wednesday by the Brazilian Health Ministry. This surge comes as President Jair Bolsonaro’s spokesman, Gen. Otavio Santana do Rego Barros, confirmed he tested positive for Covid-19.Yet Bolsonaro said earlier this week he believed “the worst had passed” for the coronavirus pandemic, during a press conference outside the Alvorada presidential residence in Brasilia. But as the number of cases and deaths continue to climb, many health experts fear the worst is yet to come.Since Bolsonaro made the comment in Brasilia on Tuesday, there have been more than 20,000 new cases of coronavirus and the country registered 610 deaths on Thursday, nearly the highest toll yet in a 24-hour period, according to the Health Ministry.Health Minister Nelson Teich said Thursday that stricter lockdowns may be needed in some of the hardest-hit regions, during a video conference with members of the lower house of Congress.Former Health Minister Luiz Henrique Mandetta said “the toughest months” are likely to be May and June, during an interview with TV Globo last month, four days before he was fired by Bolsonaro over disagreements on the country’s coronavirus strategy.

Warnings of a ‘total collapse’

Meanwhile, Bolsonaro continues to dismiss the threat coronavirus presents to the country’s 209 million citizens, repeatedly saying he believes the effects of preventive measures, such as quarantines and lockdowns, could have a worse impact on Brazil’s economy.During a speech at the Supreme Court on Thursday, Bolsonaro and Finance Minister Paulo Guedes said the economy could suffer a “total collapse” if the country doesn’t reopen. 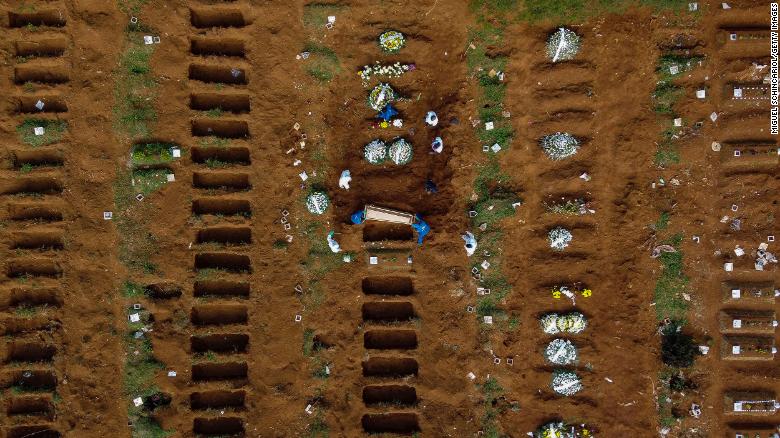 An aerial view of Vila Formosa cemetery in Sao Paulo, during an April burial.”The issue of unemployment, the issue of the economy no longer working. We can’t let the side-effect of the fight against the virus be more harmful than the disease itself,” Bolsonaro said.On March 24, Bolsonaro compared the coronavirus to a “little flu” in an address to the nation. Less than two months after that comment, there have been more than 132,000 new cases of Covid-19.It was followed by a series of controversial statements about the virus by Bolsonaro. “Brazilians don’t catch anything … they already have the antibodies to keep it from spreading,” the President has said.He added again that Brazilians are likely to be immune to the coronavirus during a March 26 press conference outside the Alvorada presidential residence in Brasilia. “Brazilians should be studied, we don’t catch anything. You see people jumping in sewage, diving in it and nothing happens to them,” Bolsonaro said.

The Amazon’s gateway city is struggling to battle the coronavirusDuring the same press conference, Bolsonaro said he believed many Brazilians had already been infected but that those people already had “the antibodies that would help [coronavirus] not spread.”The comments were made two weeks after Bolsonaro’s press secretary Fabio Wajngarten and other Cabinet members tested positive for coronavirus, after traveling to the US and meeting with President Donald Trump in Mar-a-Lago.The World Health Organization said last month there was no evidence that people who have had Covid-19 will not get it a second time.Bolsonaro says he has been tested twice for coronavirus and both tests came back negative, according to posts on his personal Twitter and Facebook pages. Congressional leaders and a Federal judge are now asking the President to show evidence that the test came back negative, after he recently implied he may have contracted the virus without knowing it.

Bolsonaro recently reiterated his claims that efforts to flatten the curve of the virus’s spread — via quarantine measures and social distancing — were ineffective.”From the looks of it, from what we’re going to see now, this effort to flatten the curve was practically useless,” Bolsonaro said during a Facebook live on April 30th. “Now, the collateral damage from all of that will be unemployment.”Bolsonaro has repeatedly pushed back against quarantine and stay-at-home orders imposed by governors in some of the hardest-hit states, such as Sao Paulo and Rio de Janeiro, during press conferences and via Twitter.

Brazil President Jair Bolsonaro defends joining anti-lockdown protestHe’s also participated in two so-called “anti-lockdown” protests outside Planalto presidential palace in Brasilia, where supporters crowded outside the gates and crammed against each other for a chance to see the President.The latest protest took place last Sunday, May 3. In a live video posted to his personal Facebook account, Bolsonaro appeared without a mask shaking some people’s hands and waving at the crowd. Banners calling for military intervention and for the takedown of Congress and Supreme Court have been seen at the protests in the past.Sao Paulo governor Joao Doria said Bolsonaro’s participation in the protests were anti-democratic.”President Jair Bolsonaro reveals, once again, his disdain for democracy,” Doria said in a series of tweets posted to his personal Twitter account Sunday. “On top of that, he’s encouraging the people from his country to disobey health and medicine.”Bolsonaro and Doria have butted heads over measures to reopen the country, including during a video conference on coronavirus response that included other governors.”We have to have a president to lead and drive the country, not to divide it,” Doria said during the March 25 call. Bolsonaro accused Doria of letting his own presidential ambitions “go to his head” and said he is an “example for no one.” 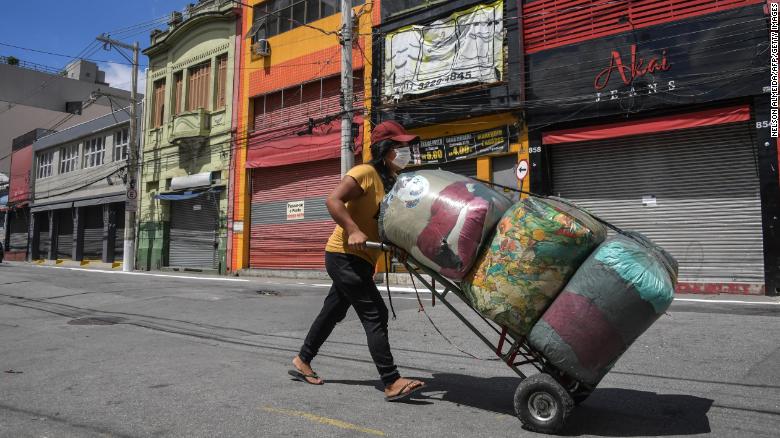 A street vendor walks along an empty popular shopping street in downtown Sao Paulo during its lockdown.The state of Sao Paulo, Brazil’s largest and home to the country’s financial capital, has registered the highest number of cases and deaths. At least 39,000 cases and 3,206 deaths have been confirmed in Sao Paulo, according to the latest data from the state’s health secretariat.The state issued a new mandate Thursday, which makes mandatory the use of face masks in public spaces, including ride-share vehicles. The state government did not specify for how long the measure will remain in place.The state is scheduled to begin a gradual reopening plan on May 11, according to an announcement made by Doria last month. It’s still unclear which businesses will be allowed to resume activities under that plan.

Bolsonaro gave a late-night press conference outside the Alvorada presidential palace on April 28, the day when Brazil’s death toll surpassed those reported in China.A reporter asked Bolsonaro about the spike, to which he responded: “So what? I’m sorry, but what do you want me to do?” He added that even though his middle name is “Messias,” which translates as “Messiah” in English, he’s not “a miracle worker.”

Brazil’s supreme court allows investigation of President BolsonaroHe later walked back the comments during the same press conference, saying “I’m sorry for the situation we are currently living with due to the virus. We express our solidarity to those who have lost loved ones, many of whom were elderly. But that’s life, it could be me tomorrow.”Brazilians in several major cities, including the capital Brasilia, protested the comments by banging pots and pans out their windows and yelling “get out of here” after the press conference was broadcast.While Sao Paulo’s numbers are the highest, many poorer states in the North and Northeastern part of the country have been heavily affected.The comments came the same week the country’s Supreme Court authorized an investigation into allegations Bolsonaro sought to interfere with police investigations following the resignation of his Justice Minister, Sergio Moro.A recent survey from pollster Datafolha, showed Bolsonaro’s approval at 33% and that the country is split nearly down the middle on whether the President should be impeached.